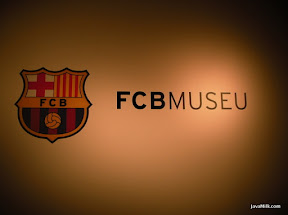 One of the to-do list during my visit to Barcelona was to see Barcelona FC Stadium. Well, although I am not a big fan of Spanish football, but Barcelona FC is a very successful club that as a football lover then I should spend time to visit and tour the stadium, who knows I could meet the players in parking lot :) 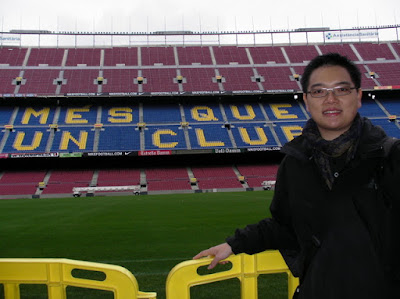 How to get to the Barcelona Stadium

The stadium known as Camp Nou is located in northwest part of Barcelona city. To reach it, you need to take Metro Line 5 and stop at Collblanc, or Line 3: Palau Reial stop. From these metro stations, you still need to walk for 15-30 minutes.

I got lost during my first attempt, after exiting Collblanc station, even after asking for direction from local (well, local Spanish speaks little English). The only help was my phone GPS & map, but also quite difficult to get into correct entrance gate (my legs almost broke after that walking, so later I took taxi after finishing stadium tour). If you want less tiring walk, consider using public bus.

We need to buy ticket to get and see Barcelona Stadium. The ticket is packaged as FCB Museu, we'll see the field and museum as well. Ticket to get inside Camp Nou and have self-tour is 19 Euro (as per writing). You can buy the ticket on the counter on non-match day. The tour itself may require minimum 1.5 hour of your time, 2-3 hours is required to enjoy it. the path is already predefined so you can only go forward without getting lost in this one of biggest football stadium in the world.

The first and main sight is the pitch itself. Before hitting the ground, I passed a little chapel. This is the place when some players need to have little pray before or after match.

If you think that we can stand on the playing grass, then sorry you are wrong :) I can only get very near the grass but still on concrete floor. Don't ever think to jump to the grass, security is everywhere. 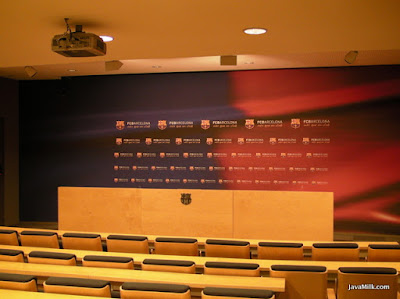 Above is conference room where Pep Guardiola holds press conference before or immediately after matches. 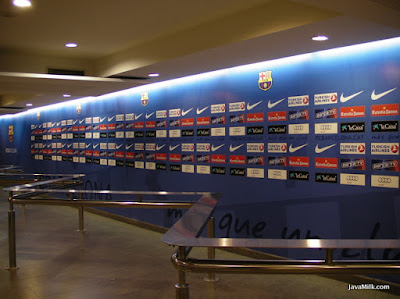 After the room, press can have interview session with players. As you can see from above photo, as we may not aware by watching from TV, journalists and players are separated with railing so they can directly walk through when losing a game and not want to have any comment to give.

Unfortunately I came alone to this museum, so I could not take my autograph with this background. Asking people to take mine is a bit exhausting (again, English is not a common language here). 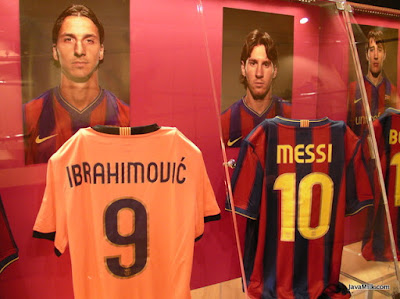 This is my favorite spot for photograph. A big glassbox where all Barca players' shirts are displayed. The line up is according by shirt number, so easy guess that number 10 is always the spot I want to take the picture, it is Lionel Messi. 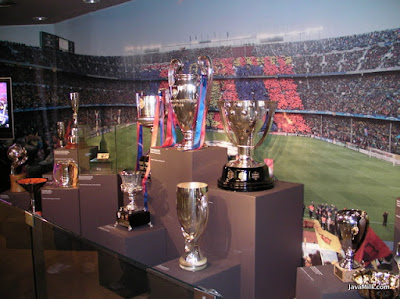 At the end of museum path, a gallery to host all the cups they have won. My visit on 2010 is so special, where in 2008-2009 season Barcelona FC won 6 trophies and made history: La Liga, Copa del Rey, Spanish Super Cup, UEFA Super Cup and FIFA Club World Cup, and most important Champions League.

There's a shop outside museum to buy shirts or memorabilia of Barcelona if you want, although the price is not cheap. Also you can have photograph with Barca players (it is photoshop work), and cost 10 Euro!

In summary, the tour is packed so neatly and magnificently, so after visiting it we don't feel pain after paying such amount of Euro money just for walking around. It is memorable, fun, also for football lovers is a must when visiting Barcelona.

As I said earlier, exiting the stadium I feel very tired so I didn't have power to walk again, so I took taxi to Maria Christina Metro station, then back to my hotel.