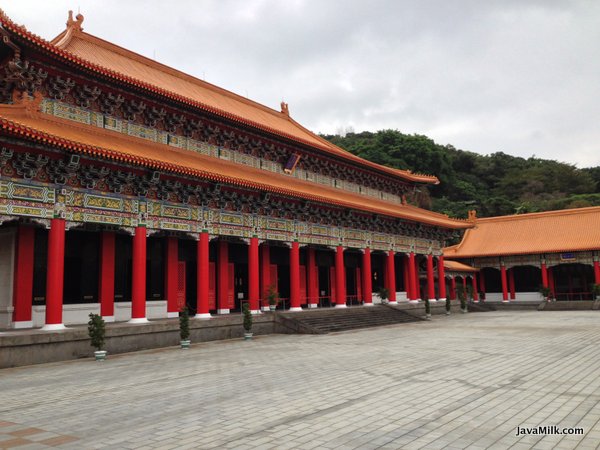 Early in the morning, have our breakfast first and we head into our coach. The coach is a double deck one, passenger’s seat upstairs and baggage storage downstairs. It is a very convenient one so we are quite happy with it. First, they take us to try the bullet train. Unlike Shanghai, there is no speed reader in the car so you can’t tell how fast it runs. Then, take the MRT to connect to National Taiwan Democracy Memorial Hall. Similar as other tour, we only takes picture here. It is hot in Taiwan, almost 38? everyday. One thing that very nice in Taiwan is the public toilet, it is provided free and clean. Taipei MRT is managed by Taipei Rapid Transit Corporation (TRTC). Trains are clean, efficient, and cheap way to travel inside Taipei city. All signs in MRT stations are tourist friendly, there will always be English translation for each station and directions.

Latest Taipei MRT map can be downloaded from TRTC website or you can see as below (click image for larger one). Lines are color coded, and notice that some lines such as red and green are merged which means no transfer is needed. Main stations are "Taipei Main Station" and "Chiang Kai Shek Memorial Hall". MRT / Metro ticket can be bought at station. The MRT card is called EasyCard, just like Singapore ez-card or Hong Kong Octopus Card, you only need to add balance to card then you can use it by tapping to sensor gate. EasyCard can be used for MRT, Bus, and car-park payment. Next, we headed to Yehliu Geopark to watch a bunch of rocks formation that have been given imaginative names based on their shapes. The most well-known is the "The Queen's Head" (???). It is too hot here, 38? in beach?? I prefer to pass the chance to watch the formation in full.

Get on the coach again, we carry on to Jiufen, a prosperous gold mining town (until 50’s), but when the mining was discontinued, the town went into sharp decline. The guide told me that it become tourist destination since a Hongkong movie starred by Tony Leung shot their scene in this area (forget the name). The movie become a box office at that time and since then Jiufen has become popular. We stop by for lunch, in the shopping street selling F&B, and souvenir. We had beef soup noodle as lunch. Fishball soup, yuyuan (taro balls), dumplings served hot or cold with sweet bean, and mochi are all widely available. Don’t say that you have been in Taiwan if you have not tried the Chou Toufu (stinky toufu). I try that and it is okay lah, just don’t imagine the smell since the toufu is very soft and sweet. At the end of the day, we ride to the top of Taiwan, to Hualian. The view is spectacular since you have the Pacific Ocean on your left and the hills on your right. Before we visit the A-mei Village, one of the Taiwanese Aborigines. We watch them dancing and singing there. Luckily, I skip the chance to dance and to sing with them, since after singing and dancing, they will take the picture, make it as souvenir and made us pay NT 400 for it. Almost get disappoint by today program, we are treated with a fabulous menu. End of today, we stay overnight in Hualien.